You’ve just bought your new four wheel drive and can’t wait to take it out for a spin on one of your wild off-road adventures, but what if we tell you your 4×4 is just as good as a 4×2 in some awfully muddy situations.

It’s better to be prepared than having to deal with the enormous costs of repair, and a helpless day waiting for help in the middle of nowhere. Here is where Lockers come into play.

When you’re on the road, what matters the most is how you overcome obstacles and traction. This is why it’s important to know the terrain before going on one of your trips.

Most factory-made cars in showrooms have an open differential and that’s why you might need to get aftermarket lockers to fit your need.

Still confused? Let’s break it down to the basics and see why you might need a locked differential and which one fits your need. Today’s match: E locker vs Air locker.

What is Traction and why is it so important?

Traction can be described as the friction between the road and your wheels – this can differ from road to road. It is imperative that your car wheels always have a grip on the road.

When this doesn’t happen is the case that you’re on an off-road adventure and one of your wheels has extremely low traction due to the terrain being muddy, the wheel would keep on spinning aimlessly.

And for your car to move forward you need enough traction on both wheels. You’re stuck.

If your car has an open differential, it might start spinning even more, leading you nowhere.

The high-end S-class and 7 series models of BMW and Mercedes-Benz do have traction control to almost brake the moving tire and bring it to the required speed, which is always a good feature to have.

What are Differentials and why you need a locked differential?

Let’s move on to differentials and why it is important to know which one you need.  A differential is attached to the ring gear and transfers the spinning power to the axles which then rotate your wheels.

In short, a differential is what helps your wheels spin at different speeds. This is important when your vehicle is turning or especially making sharp turns.

The advantage of an open or limited slip differential is that even though the power is initially distributed equally between the two wheels, whenever the wheels experience different amounts of traction it will increase the power expended on the wheel with less traction.

Both differentials work on the same basis but there’s less chance of slippage in the limited slip differential.

Now here is why you need a locked differential. If you frequently go off-roading on terrains that provide less traction, which are not city pavements or the type, even if one of your wheels receives less traction, because of the open differential you have it will be as if both of your wheels do not have a good grip on the road and will really hinder you in moving forward.

Why is that? Because, as explained previously, most of the power will go to the wheel that has less traction, leaving the other wheel with minimum power to move forward, which would just be adding to the problem.

With a locked differential, your wheels would spin at the same speed regardless of the amount of traction each of them has, as it works by restricting each wheel on the axle to the same rotational speed.

Now the question is which type of locker should you get installed and what will it cost you?

E lockers and Air lockers are popular aftermarket manual lockers. Air lockers use pneumatic pressure to slide the locking ring forward towards the spider gears, locking them against the housing.

This prevents differential gears from rotating, therefore stopping the axle shafts from turning independently of each other, which converts an open differential into a spool.

For this, you need to get quite a few things installed as a modification, including an air compressor, air tank, airlines and wiring.

In comparison, E lockers use electromagnets to operate. This electrically actuated locker pulls the roller cams apart, which are then kept separated by ball bearings. When this happens, heavy pins are pushed down into the side gear of the differential, locking it.

Unlike Air lockers which need a tank, compressor, etc. E lockers just need a 12V power source to operate, which usually comes from the vehicle’s battery.

Advantages and Disadvantages of an Air Locker

The Air locker definitely involves a complex, but really effective and reliable system. While trail-riding you might need your locker to engage instantaneously in case of any sudden situations, and that is what you get with an Air locker.

The ARB Air lockers take less than a second to engage, which can be very helpful on high-risk trails.

Not only that, but while installing an Air locker you also have to get an air compressor installed which can be very beneficial. These on-board air compressors are ideal for inflating tires, mattresses, and even cleaning the air filters and door seals of your car.

This can be very useful during road trips as you do not have to reserve any extra space for a compressor. Air lockers are also environmentally friendly and reduce the chances of vehicle damage, as cars with Air lockers can be driven in a safer and more controlled manner.

But there are some disadvantages to getting Air lockers. First of all, they’re harder to install and even though they’re cheaper than E lockers, with the added cost of the compressor and tank it might actually cost slightly more than an E locker.

The airlines installed are prone to leakage if not installed properly or if the Air locker is of bad quality. There is also a chance that the differential lubricant is drawn into the airlines.

If you live in a place that experiences low or extremely low temperatures then the airlines are also prone to freezing.

Advantages and Disadvantages of E lockers

E lockers are also reliable in the sense that they depend on only a 12 V power source which is provided by the vehicle’s battery, so there’s very little that can go wrong.

E lockers are not only strong but also quiet as they produce no compressor noise or vibration.

If you’re willing to invest in your E lockers, Eaton provides strength as well as durability from their standard cut gears, especially intended for heavy-duty application.

But, there is a downside to E lockers. They do take time to engage and are not as fast as Air lockers, so if that split second decision really counts then this won’t be the answer.

Costs of an E locker

E lockers usually cost around $1000-1900, especially if you’re investing in a good brand that delivers on quality like Eaton Harrop. The installation costs approximately $400.

E lockers can also be installed yourself if you are familiar with differentials, but it’s always safe, in the long run, to have a professional do it so you don’t have to worry about repair costs in the future.

Costs of an Air Locker 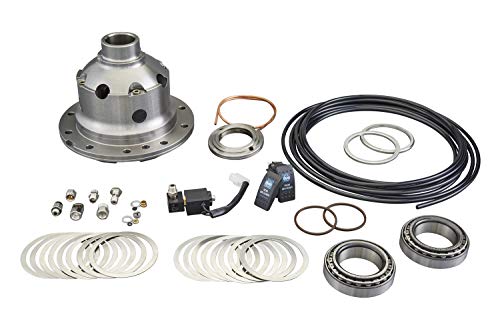 An Air locker can cost you a bit more than an E locker just because of all the extra parts that need to be installed. If you’re investing a good brand like ARB it can cost you around $1000 but the price can go up to $2000-2400, including the compressor, tank, installation etc.

In the battle of E locker vs Air locker, we really can’t say which is best. In the end, it all depends on what you’re using your car for.

If you drive a tow truck and off-roading is something you might rarely do, then the E-locker is a better option, especially for your rear wheels.

But, if wilding out on trail rides is something you often enjoy, then an Air locker would suit you best. Even if it costs a little bit more, you get a lot out of what you paid for.

It’s not only a foolproof system if installed correctly, but it also engages faster, and having an on-board compressor can never go wrong.

Remember that differential lockers are something that you can’t make budget cuts on.